The house we bought in 2013 has reticulated gas supply, used at the time for hot water, space heating, and a stove top. It’s 3-bedroom, free standing, built in the 1920s with various modifications since, and leaky.

“Natural Gas” sounds so clean, and the gas industry calls it “a natural source of fuel”. Natural or not, it’s a fossil fuel that contributes to global warming and we’d prefer not to burn it in our house.

A year after moving in, we added solar panels to roof. Around the same time we started to hear that all-electric homes are an economically and environmentally sensible option. The running costs were claimed to be equal or better than gas (partly due to increased solar self consumption), and our CO₂-eq emissions would drop over time as the local electricity generation continued it’s trend towards renewable sources.

The environmental benefits were clear, but the financial consequences less so. What were the one-off conversion costs, and for our aging leaky house would the running costs really be equal or lower than gas? Investing thousands of dollars to convert, only to score increased running costs would suck.

In June 2019 we dived in, converting space and water heating from gas to electric (the stove top is still on gas…. for now). The state government offered a $1000 rebate on the hot water conversion, and Bank Australia allows a 3-month pause of mortgage repayments to fund sustainable upgrades.

That was the upfront costs covered, but it was a leap of faith when it came to running costs. Would they increase?

To answer that question, 12 months down the road I’ve collected 6.5 years of gas and electricity bills and graphed the 12 month rolling average cost.

For the 3 years before the conversion, we spent a combined average of $150-175/month on gas and electricity. More in winter (cool climate, poor passive solar layout, leaky house), less in summer (thanks solar). The range is roughly the same since the conversion.

A reduction would’ve been nice, but we’re relieved they didn’t go up. 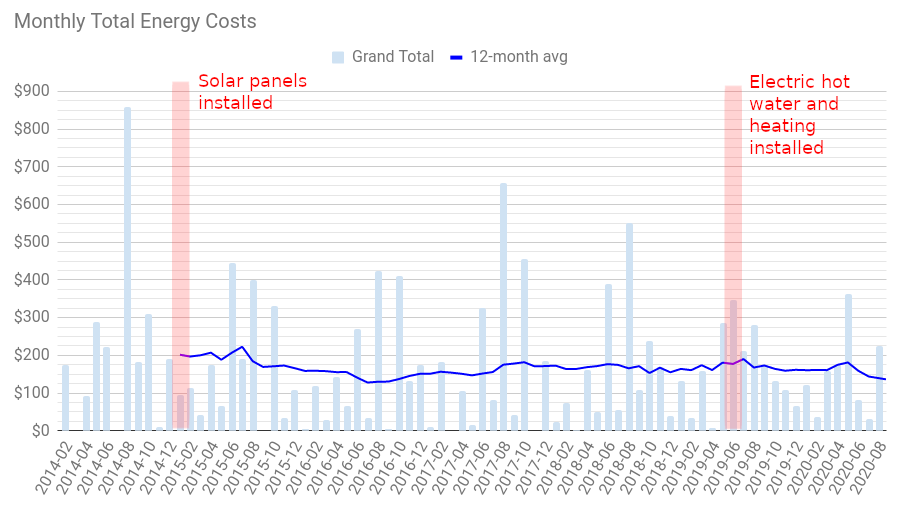 Charting the same data, but separating out the gas and electric costs is interesting too. Our gas has dropped to a consistent $35/month (~$1/day connection fee plus a small amount of usage) year round, and our winter electricity costs have increased significantly.

We’re planning some draught proofing and additional insulation, and hope to see the winter bills come down a bit over time. 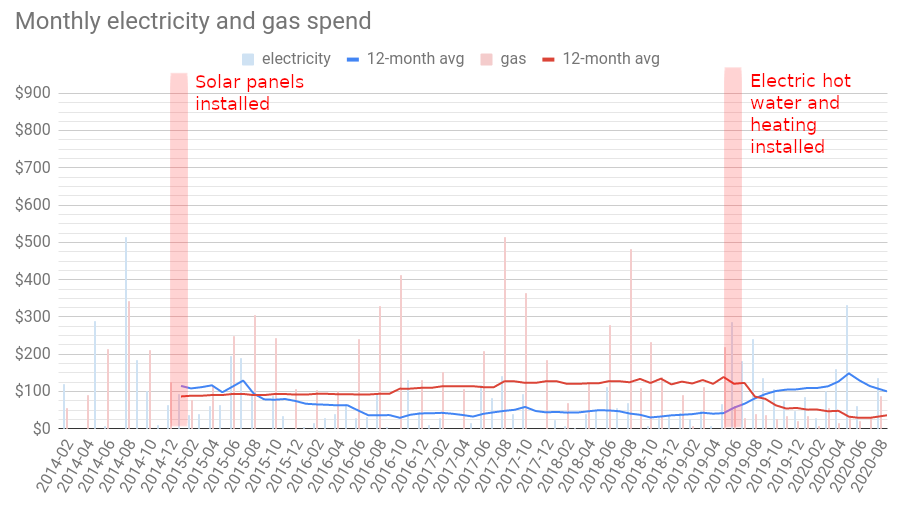 Hopefully soon we can convert the stove top to induction and disconnect our gas altogether. If we save only ~$30/month from no gas connection fee it will take a long time to payback the install cost, but the symbolic milestone of burning no fossil fuels in the house will be fun.

On purely financial grounds, fully electrifying an existing house may not make sense - except by doing it slowly over time as equipment needs replacing anyway. Without a drop in running costs, paying back the one-off conversion costs will be difficult. However if you’re building a new house, our data suggests it’s worth skipping a gas connection. All-electric is cleaner and it may not cost you more to run, despite what your builder tries to tell you.

Of course, there’s also environmental considerations that may justify the conversion too.

For anyone considering all-electric, I highly recommend the Efficient Electric Home group on Facebook. Facebook is an unfortunate choice for hosting the discussion, but there’s ~15,000 members and tonnes of great advice.