I’ve dabbled in running for about 8 years, but it was only in 2019 that I went from an on-again off-again attempt to fit exercise in around kids and work to a regular habit that I enjoyed. The tipping point was when 5km became consistently achievable, opening up routes from home with greenery. 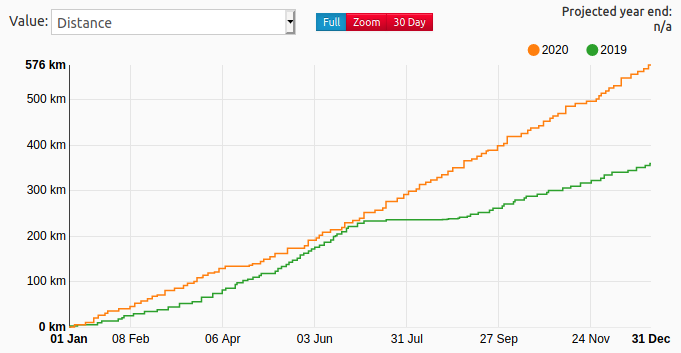 I focused on building routine and getting our regularly, rather than on distance or speed. Still, over the year I set a distance PB (17Km), 5Km PB (23:43, 4:44mins/Km) and 10Km PB (54:03, 5:24mins/Km). It was the year of COVID and lockdowns, so mostly I was running on suburban streets and local creek paths close to home.

I finally stopped running with my phone in hand while the Strava app recorded, and bought a Garmin forerunner 45. It’s brilliant - it does just what I need with no frills, even if Garmin’s approach to security is disconcerting. My phone still comes along for music and podcasts (and Google Pay in an emergency), but sits in a flip belt where I can mostly ignore it. Headphones are a pair of Samsung Galaxy Buds connected to the phone via Bluetooth. They came free with my phone and they do the job. Shoes are Vivo Barefoot Stealth 2 that are past due for replacing, and they’ll absolutely be replaced by something from Vivo Barefoot.

My main goal for 2021 is to continue making running a habit and to get out 104 times - twice per week. Within that I’d also like to run my first half marathon (only 4Km to go!) and cover a total of at least 700Km. Let’s hope the injury gods are on my side.